Commentics v2.4, released on 27/06/2013, includes many improvements over the previous versions. Some of these improvements will be particularly useful to larger and busier websites. Let’s take a look why.

With the ‘Bulk Actions’ feature, you can now mass select items in the admin panel in order to apply a bulk action such as deleting, approving and sending. This makes administering far quicker as each action no longer needs to be done individually. The bulk actions can be applied to various types of items including comments, pages, admins, bans, subscribers, captcha questions and database backups. 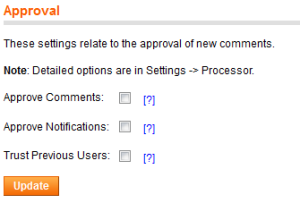 If you are manually approving all comments, you won’t want to keep approving comments by the same user, time after time. This is unnecessary because it means having to log in to the admin panel to approve it, it delays the conversation, and once a user’s comment has been approved that user should be trusted. In Commentics v2.4, you can now enable an option in Settings -> Approval so that users who have previously posted an approved comment don’t need to be approved again. It works by matching the user’s name and IP address.

In previous versions of Commentics, the page is created as soon as it is viewed. This may be fine if you only have a few pages but with larger websites that have hundreds of pages this will add a lot of extra data that doesn’t need to be there, making it more difficult to administer and causing performance issues. The ‘Delay Pages’ feature solves this by only creating the page once a comment has been submitted. Due to this, the feature is enabled by default. This feature did exist in v2.3 but the logic was not as good as it is now because previously the page would be created when the form is submitted (and not when the comment is submitted) and thus the page would be created simply by clicking the ‘Add Comment’ or ‘Preview’ button without even having to complete the captcha. 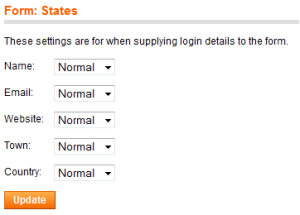 For websites that have a login system, you may already be supplying the Commentics form with login data to save your users from typing their details. In Commentics v2.4 you can now go to Layout -> Form -> States to control the state of the form fields so that the fields are either hidden or disabled. This makes the form smaller and simpler, ultimately making it a better posting experience. 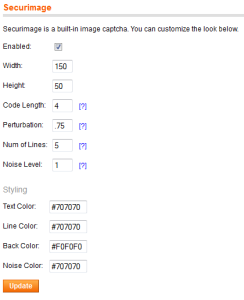 Since the Commentics project started, it has become clear over time that its users have differing opinions on which image captcha to use. Some people prefer ‘Securimage’ and others prefer ‘ReCaptcha’. As of Commentics v2.4 both are built-in meaning that you can easily choose between the two. This will remain the case for as long as the two captchas are available. The ‘Securimage’ captcha has received a solid integration with admin settings to control its hardness and look.

In addition to the above improvements, other things worth highlighting are important bug fixes for mod_rewrite compatibility, so the script should now work flawlessly when the URL has been re-written. Also an email setup page has been added to the admin panel where administrators can control such things as the email signature and sender email address for all of the emails from a single page. The setup page also includes a feature to send a test email to the administrator to test whether the script has the correct email transport settings configured.

We'd like to hear about Commentics on your site! Just click here and answer these short questions to appear on this blog.