The release of Commentics v2.5 provides a lot of important changes that will benefit both its users and its administrators. One of the main focuses of this release has been about updating the interface while it also introduces a new override system which will make customisations far easier and upgrades far safer. Let’s take a look at what’s new.

A large number of changes relate to the look and usability of the script. For example, voting for a comment no longer results in the user seeing an ugly JavaScript alert message every time that they vote, which they have to then respond to by clicking OK. Instead, the user now sees an unobtrusive and subtle message appear next to where they clicked to vote. This should encourage the user to vote for more comments. Similarly, the JavaScript dialogs for the flag confirmation and the BB Code inputs have been updated to use the modern and popular jQuery UI Dialog. Elsewhere, clicking the agreement links now opens the text in a jQuery lightbox rather than in a new window (tab), and clicking the Permalink button flashes the background of the comment rather than adding a thicker border.

This release introduces a new override system which, although basic and in its infancy, should make a big difference when making customisations that you want to be preserved when upgrading the script to newer versions. In the script you will now notice a number of folders named ‘custom’. By copying any of the files from the folder above into the custom folder, the copied files will override the original ones. As these are new files, none of them will be overwritten when next upgrading. With the email, agreement and word files, the whole files are overridden. However, with the CSS and language files, you only need to override the specific parts that you want to customise, making it easy to see what you’ve changed. In later releases, the override system will be enhanced further to cater for changes to core code. 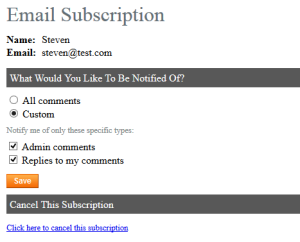 Some of the other changes that you may notice in this version are a switch from the deprecated MySQL extension to the new MySQLi extension, a new setting to display parsing information so that you can see how long the script takes to load, and translation improvements so that you can translate the BB Code/Smilies and the times and dates.

We'd like to hear about Commentics on your site! Just click here and answer these short questions to appear on this blog.